In a short answer, Kusadasi (or “Ada” which means island as locals call it) has become a rather interesting town. It was a very popular holiday resort by Dutch and Germans 15 years ago, having so much natural beauty and character, nice beaches, and great nightlife. Nowadays, it is more of a busy city with lots of concrete, where people live all year round. It is certainly not a standard Anatolian Turkish town by any means, but a prettier and more Western version by the sea. 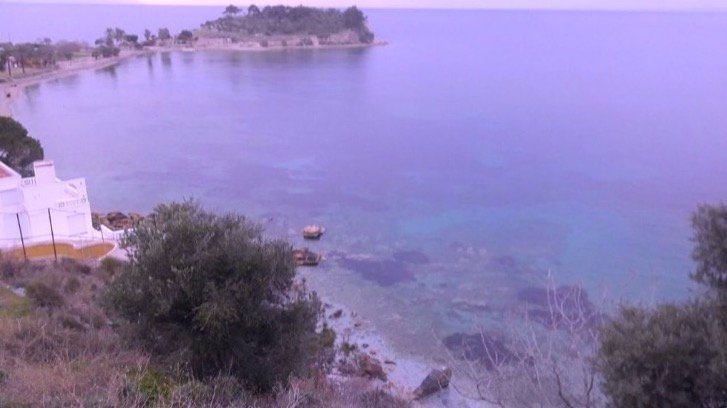 And over the last ten to fifteen years, there is quite a bit that it lost and it gained for sure. I haven’t been back since and my last time was actually for crossing over to the Greek Island Samos and back. Although I have seen many photos and a couple of videos of Kusadasi before, I was quite surprised with what I found during my three-day stay here. On this page, I’ll try and give you an overall picture of what I saw and experienced.

The Advantages of Kusadasi

As you may have seen on the previous posts, I was in Antalya and Fethiye Oludeniz areas for a week before getting to Kusadasi. And at each location, I had this “can I live here throughout the year without getting bored?” question in my head and I had a look at a few flats too. To see what the property prices were like and what I could get for the money in terms of the quality of building and neighborhoods etc. And I also wanted to get an overall picture of which area would appeal to me most, to evaluate their pros and cons. 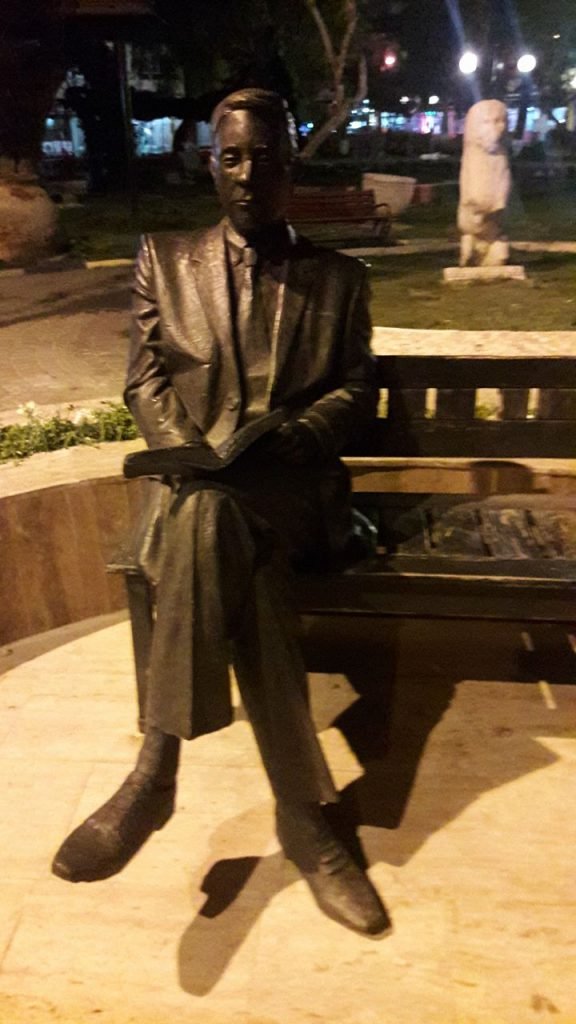 Kuşadası Statue in the Park

By what I saw in three days, even in the middle of winter, the center of Kusadasi is as lively as Bodrum, more than Didim, Marmaris and other Turkish resorts, but obviously not as much as Antalya, which is the fifth largest city in Turkey with a summer population of 2 million. One big advantage it has is its proximity to a great metropolitan city like Izmir which has a population of more than 3.5 million. You can get to Izmir from Kusadasi in just under an hour by car.

Although Kusadasi is a part of Aydin province, the nearby historical town Selçuk (pronounced Selchuk) belongs to Izmir province and it will soon be connected by direct inner city train to Izmir center. And this means you’ll be able to get there just like you would get to a suburb of Izmir. Another major advantage is the property prices here. They are much cheaper than posh resorts like Çeşme and Bodrum. And prices here are around 20-30% cheaper than Antalya City on average but more expensive than Didim area. I think the affordability is mainly because of the amount of concrete there is in the center. 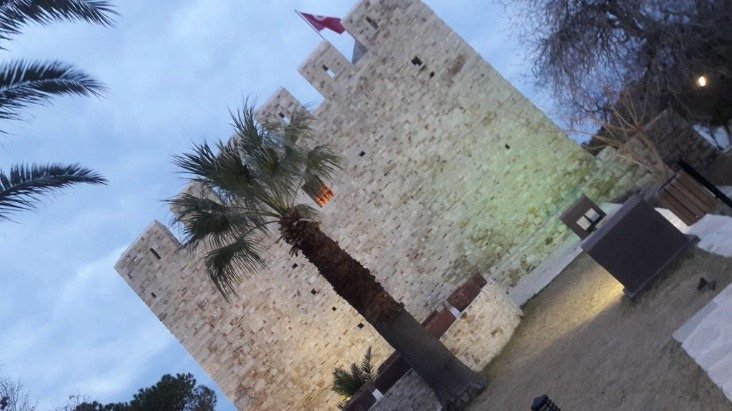 If Kusadasi preserved what it had in the past, the real estate prices would be no different to Bodrum now. When you come here you have to see it as a city rather than a resort town, that is how much it grew. And this is also a positive thing as what you have is a working town that is lively and happening all year round. There are many touristy and beautiful spots in and out of Kusadasi.

If you consider the center as the city center, there are summer houses starting from Ladies Beach then all along the Long Beach to Davutlar, Güzelçamli and Dilek Yarimadasi and pretty landscapes all around. I keep saying “concrete” but it wouldn’t be a problem if it was like the concrete of Monte Carlo or Dubai, with high rises and modern architecture. The newer buildings here are quite nice but you also have a lot of the 80s 90s buildings that are rather ugly. This town seems to have randomly developed with not much concern over beautifying the neighborhoods, it looks like a “little Izmir”. 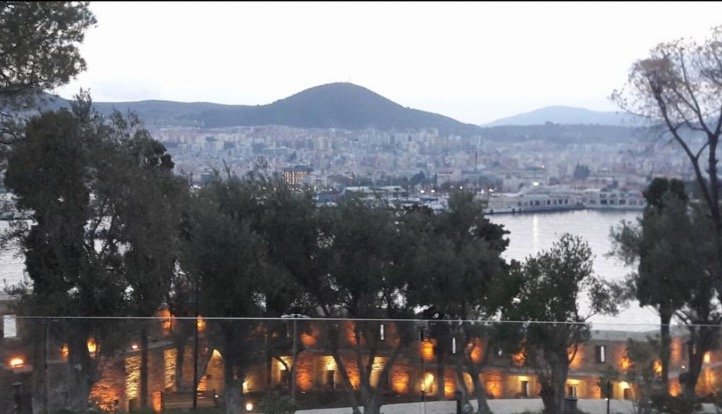 Kusadasi is a city of more than 100k people which becomes half a million over summer. And just like in any city, there are ugly parts and beautiful parts. My hotel was in the Ladies Beach area and it was a bit quiet around there because it was winter. But you can easily walk to Kusadasi town center in about 20-25 minutes.

And you have pretty much everything you may need and there are lots of people on the streets. I checked into the hotel and wanted to see how the town looked and felt on a weekend in winter. First I walked down to Ladies Beach, which was less than a hundred meters to my hotel, and the beach and the ambiance were quite all right. And there were a couple of shops and restaurants open too.

After taking some photos on Ladies Beach, I headed up to Kusadasi via Güvercinada. On the way, I passed through some beautiful little coves with water as clear as that of an aquarium. And there were a few nice and neat looking residential complexes by the sea. It looked like there were a few people living here in winter too. The reason Kusadasi is a happening place all year round is not just for the people that live within Kusadasi but the nearby big towns and cities like Söke, Aydin, Selçuk, obviously İzmir and others. You have a lot of people coming down here for the weekend, some stay overnight and others just for the day. 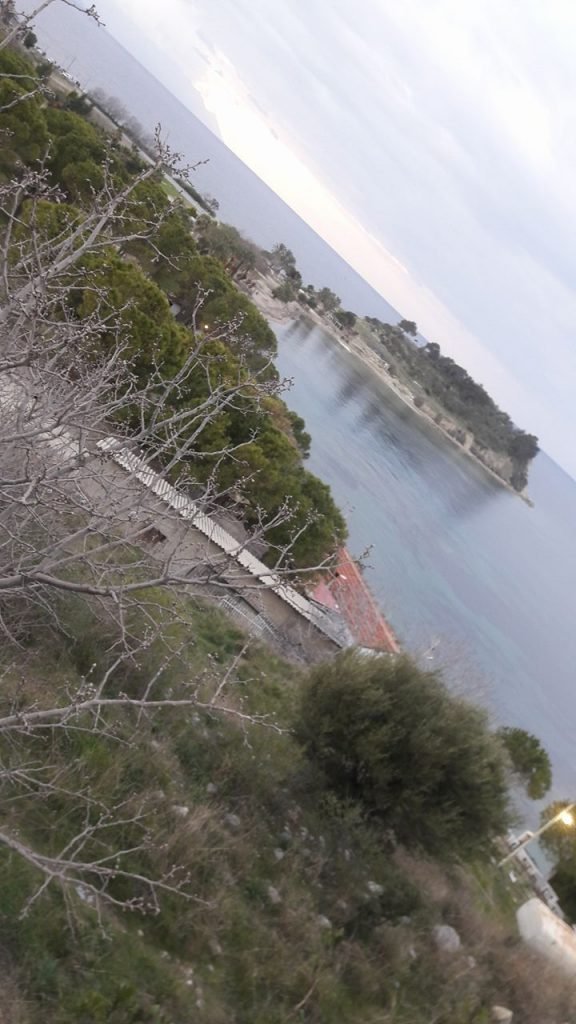 Kuşadasi Town Center is probably not as green or natural as Fethiye area but it certainly has a more Mediterranean, secular and Western vibe. You’re not going to see many women in Muslim outfits here, those were actually a small minority from what I saw in three days. There are four modern shopping malls and many upmarket cafes, restaurants, and bars along the sea.

The main Kusadasi bazaar is very lively and happening overall and there are many eating places that would appeal to every budget. And this is the middle of winter when the high season starts in April and May, it should be a lot better. I also quite liked the historical texture and feel of the city: Pigeon Island and the inner castle, Caravansarai, Kaleiçi Mosque and other mosques and a historical Turkish hammam.

I quite liked how it looked in the evening too and felt like a fun pace to be, and those ugly buildings were hidden in the dark :). The most important appeal of Kusadasi is that you have lots of interesting and beautiful places to visit nearby. This is a major cruise port and many massive ships can dock at the same time. The pier is very close to the city center and many tourists go and have a look around town and mainly visit the extraordinary ancient site of Ephesus which holds some of the largest excavations of Greek antiquity. 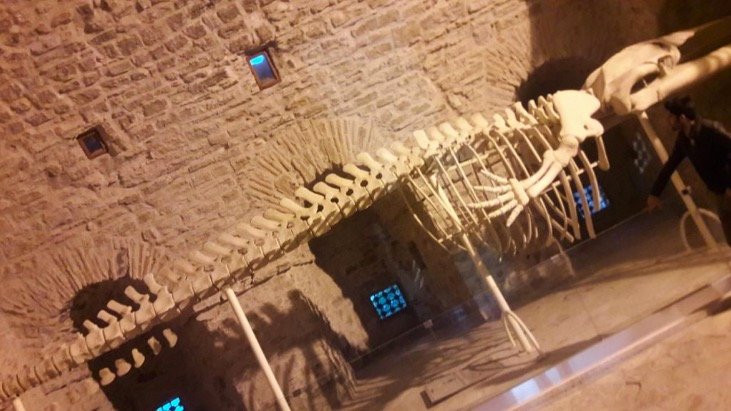 Ephesus is by far the most important archeological site in all of Turkey and will give you a clear picture of what life was back then in Roman Empire era. Ephesus and other attractions are mainly why the tourists come to Kusadasi. Otherwise, it is not for how pretty the town looks, but it certainly is quite a fun place to be for a few hours or for a few days, and there is sun, beach and some history too. Kuşadasi used to have a much higher tourist profile of high spending Germans and Dutch. Nowadays you get more of poorer tourists that don’t bring much to the economy.

Places to Visit around Kuşadası

Apart from Ephesus, you have Virgin Mary’s House, Selçuk, Temple of Artemis, Kirazlı and Şirince villages, Dilek Peninsula etc. There is simply a lot to see around here. You have the beautiful beaches all the way up to Güzelçamli and lovely bays or Dilek Peninsula. You can actually get there by one of the daily boat tours. There are three large water parks in Kusadasi: Adaland which is the largest in Europe, Aqua Fantasy and Long Beach Aqualand where you can spend your whole day. This is not a flat town at all, it is quite hilly and the landscape is extraordinary as soon as you get out of the ugly city. Around here, it is very different to Mugla Province, but still quite nice with also the beautiful Aegean bays. I spent most of the rest of my stay in the town itself and driving around in real estate people’s cars.

Can you live in Kusadasi All Year- Winter and Summer?

Although it was the middle of winter, I can not say that I was bored at all and have really enjoyed my stay here. Even though I like Antalya very much as far as the Turkish cities go, Kuşadasi has the advantage of more affordable real estate and better weather, as well as the proximity factor to a very large city, Izmir. Antalya has unbearably hot and humid summers.

Being up north, the temperatures are generally lower in Kusadasi than the southern resorts. You also get the breeze here, which doesn’t exist even in Izmir. The only negative I can see is the amount of concrete there is and that disappears as soon as you start seeing it as a city, rather than a resort. And if you’d like to live in a quieter and greener area, you have the resort areas of Kusadasi. 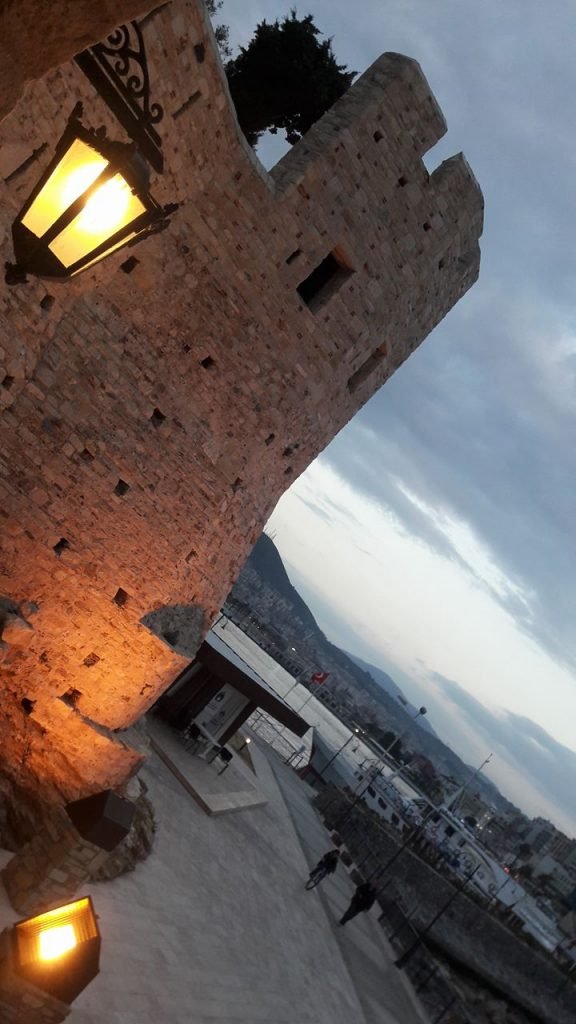 Kuşadası Castle and the City

I returned to Istanbul from İzmir Adnan Menderes Airport, which is very large and modern. A few local Turkish airports I’ve been to over the last few years were better than the airports I saw in Barcelona, Berlin or Budapest. You take the airport transport/minibus from the main bus terminal of Kusadasi or you can be picked up on their route somewhere in the town center- they have a few pick-up points.

I got this service from Last Minute Tours at the terminal and the one-way ticket to airport cost me 20 liras. If you choose the main Havas airport service, that will cost you 26 liras. Overall I am happy with Kusadasi and as I mentioned there are pluses and minuses to any place. And it will mostly depend on your expectations and tastes. But this is a town anyone can live throughout the year and probably not get bored easily.

There is also an expat community in and around Kusadasi, mainly the British retirees. But after what has been happening in the country over the last couple of years- the coup attempt and terrorist attacks in Istanbul and Ankara, some of them have left and others are seeing it as an opportunity to purchase Turkish properties at reduced prices in European currencies- euros and pounds.

One thing to point out is the house prices generally go up when the high season starts and they are cheaper in autumn and winter. But my personal opinion at the moment is the atmosphere in Turkey is a bit uncertain as we’re also coming up to the big referendum on 16 April. Each person’s expectations will be different after all, and I just wanted to convey my own impressions on the town. If you’re experienced about the area or have information or any suggestions, please feel free to share with us. Thanks.